Them some Boney Bitches in the new Express Commercial

Everytime this Express Spring 2011 commercial  comes on I whip my hair and go "I can't believe an Express commercial is featuring Boney M.!"


Now I don't know who the "H" Duck Sauce be, but Boney M., honey, I know from my days at the Alexis Bittar plastic jewelry factory where every late 70's through early 90's gay E chant along pumped loudly into your subconscious.


Boney M. was one of those German Machiavellian produced bands made up of 4 Jamaicans getting their big break 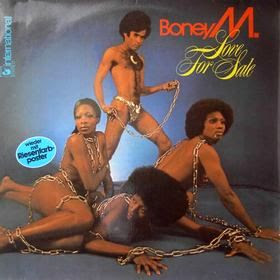 Somehow they linked together a slew of hits in the go-go disco 70's including the most amazing jam on the Alexis Bittar playlist, "Rasputin"

Featuring such indelible lyrics like "Ra Ra Rasputin/ Russia's greatest love machine/ It was a shame how he carried on" this song is the ideal commercial background to promote the next interpretation of Kira Plastinina that hits the states. You heard it here first!


So faithful readers, I'ma go out on a limb here and say Boney M = the way of the future. Might I suggest we investigate the whole of Boney M's back catalog now and then we can perk up our ears and giggle to ourselves when the latest Mazda's ad bangs it out "Ma Baker" style.
Posted by mac at 9:37 AM

Email ThisBlogThis!Share to TwitterShare to FacebookShare to Pinterest
Labels: Express, Thanks for the AD