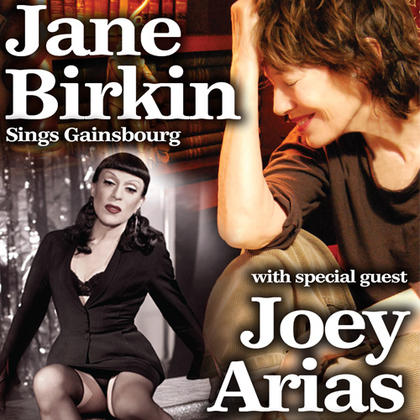 When Mr. G called with a "So I got an extra ticket to see Jane Birkin tonite at Town Hall, wanna go?"... I mean how else could I reply than with an ecstatic "YES!"
My eyes no longer fixed on the umpteenth Givenchy Nightingale bag I'd described on a rare Sunday office day (ooh another earned comp day off for a rainy February day) I jumped. Leapt. Shouted. My co-worker perplexed, "Wait...who?"
Flummoxed, I had to call someone who would appreciate seeing a style icon and wife to a lyrical genius: Ms. Stillrich never fails and sure enough she was over the moon on this monumental moment in my monthly.
Joey Arias more than opened the show with a borderline coup of cooing, trilling and scatting. The four song set was over too quick and featured buoyant versions of "Why Don't You Do Right" and Billie Holiday's "God Bless the Child"

That B knew how to enter with my personal favorite Serge song, "Requiem Pour Un Con".

The show was a smashing one off spent with a legend of the fashion, art, music and film world. The seemingly inevitable Joey/Jane duet never emerged, but Birkin wowed the audience for over 2 hours and we left whispering "Oui.... nous l'aimons...."
Posted by mac at 11:21 AM