Very few things in life are worth a 7am alarm call  and a line around the block.... 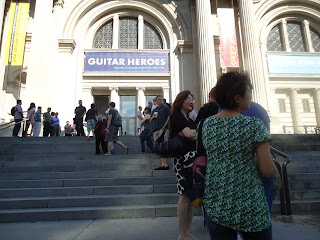 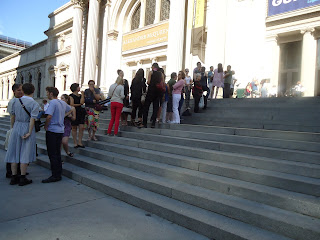 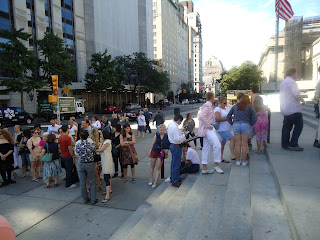 but words cannot suffice for what my eyes took in today 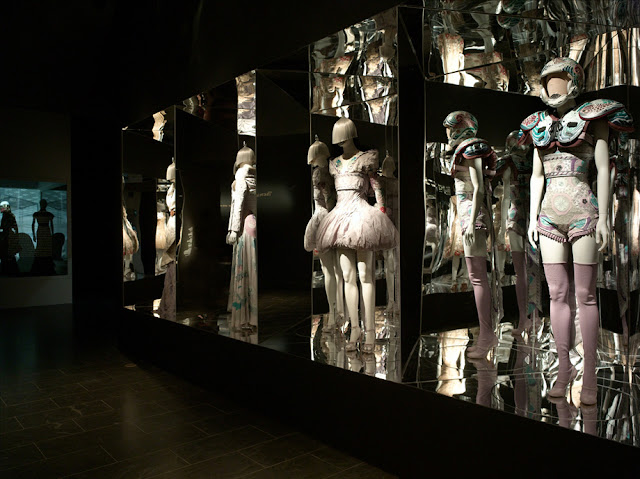 or rather, what my eyes tried to take in. The visuals of "Savage Beauty", a masterfully curated exhibit on the works of Alexander McQueen at The Metropolitan Museum of Art, are too much for one sitting 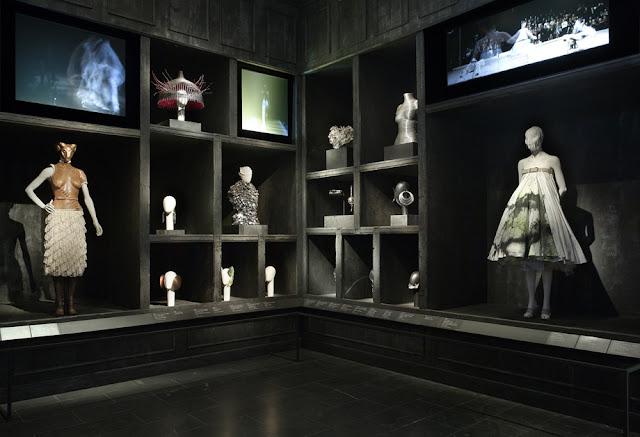 (While films from runway presentations flicker above, mannequins flaunt McQueen's extravagant  apparel and cubbies house his jewelry collaborations with Shaun Leane and hats with Philip Treacy)
It's hardly a case of needing an edit or restraint, it's just that no one can take in all the details. Its accepted in the industry that McQueen was a brilliant tailor, yes, but his attention to detail is beyond simple button holes and hems. He crafted pieces based on well thought out romantic imagery and personal and historical influences 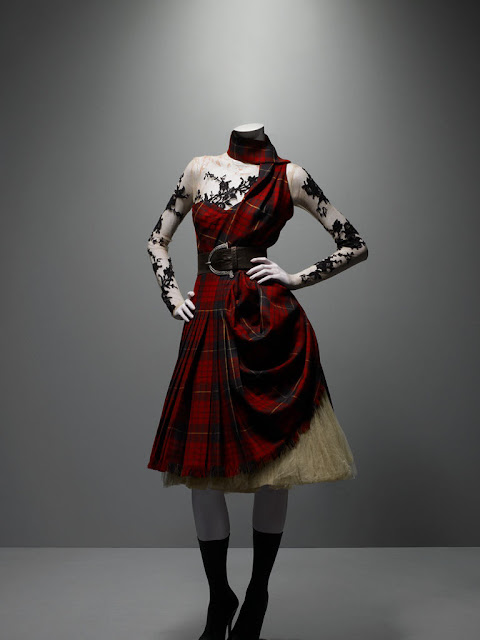 (McQueen's tartan was woven throughout the Autumn/Winter 2006-2007 collection "Widows of Culloden")
Further, he was a man of torn loyalties: art versus commerce, Victorian austerity versus appreciation of the womanly form, his bloody Scottish heritage versus the cosmopolitan London lifestyle he fell into step with

“[This] collection is . . . romantic but melancholic and austere at the same time. It was gentle but you could still feel the bite of cold, the nip of the ice on the end of your nose. . ."

-Alexander McQueen on "Widows of Culloden"
Choosing to relieve my sense of sight, I focused on McQueen's words. So many times he referenced his Scottish heritage and the country's violent history. Perhaps that's why doom and ugliness were such reoccurring themes in his work 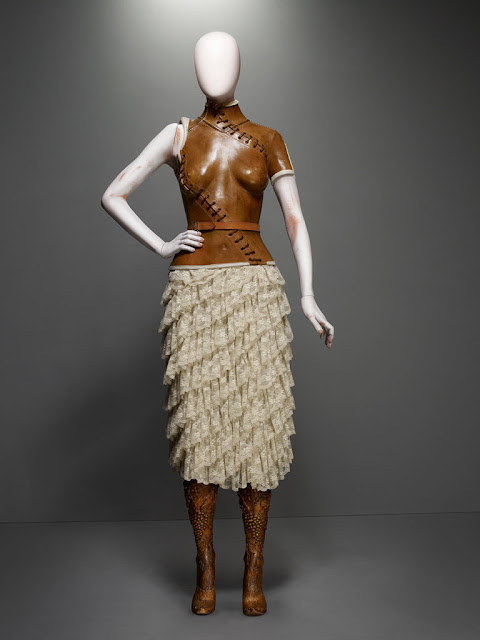 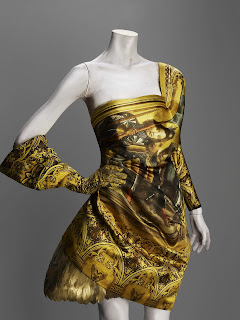 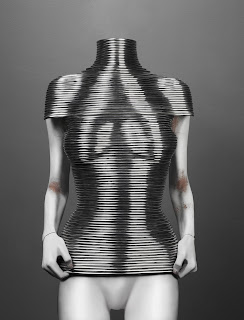 ("The Overlook", aluminum coiled corset, Autumn/Winter 1999–2000)
(Religious iconography and gilded duck feather underskirt at Autumn/winter 2010–11)
But if there was a thesis to the trajectory of Alexander McQueen's art, I'd say this quote is the clue:

"The title of the show ["It's a Jungle Out There"] was a play on animal and man. They are both gross and very much the same"

This was the # 1 concept I took away from the show: Man, despite the artifice, the airs, the core conceit of hiding under cloth and coat, has skimmed off the primordial soup like every other part of nature. We are with bone and claw and fur just like our cousins still on all fours. I was blown away by the multitude of allusions to nature and man's place in the kingdom of survival of the fittest 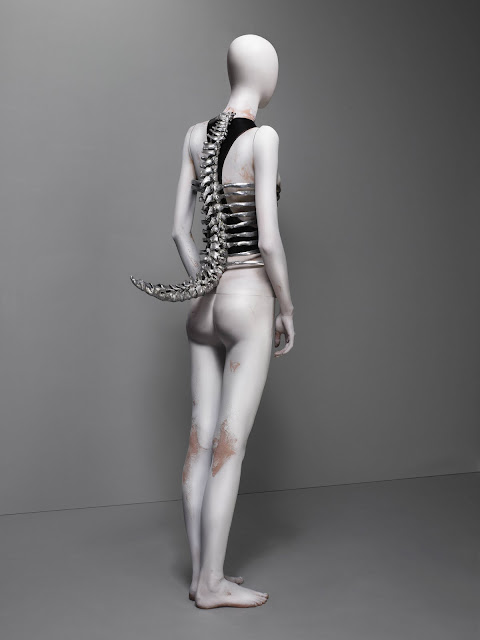 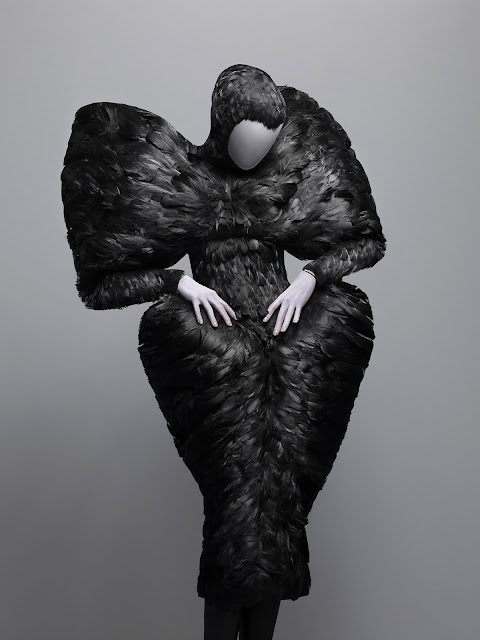 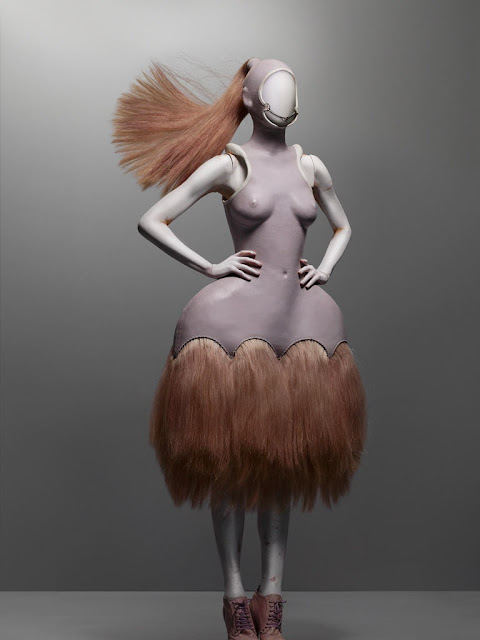 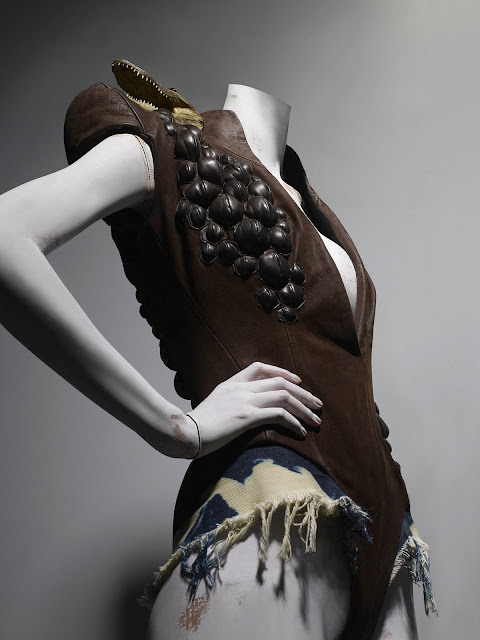 (Taxidermy crocodile heads and brown leather bodysuit. one of many animal transformations in the Autumn/Winter 1997-1998 collection "It's a Jungle Out There") 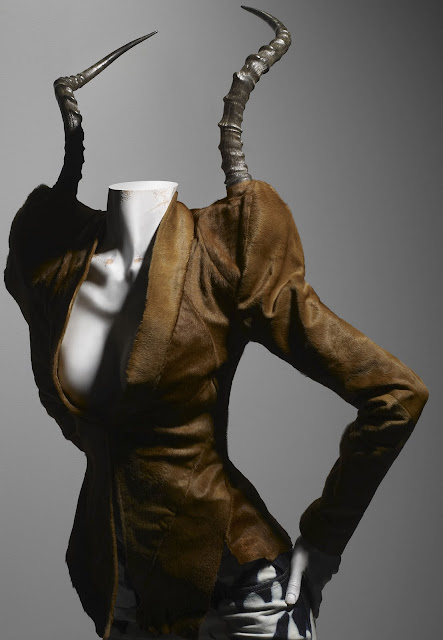 (Pony skin and impala horns. The metamorphosis is complete. Autumn/Winter 1997-1998 collection "It's a Jungle Out There")
"Savage Beauty" ends with the Spring/Summer 2010 collection "Plato's Atlantis" (his penultimate womenswear collection) where he takes us full circle 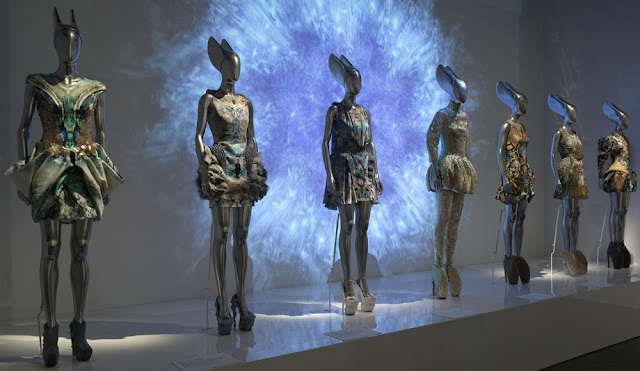 “[This collection predicted a future in which] the ice cap would melt . . . the waters would rise and . . . life on earth would have to evolve in order to live beneath the sea once more or perish. Humanity [would] go back to the place from whence it came.”

Resplendent work, yes, but man did I need this chocolate and peanut butter cupcake afterwards! 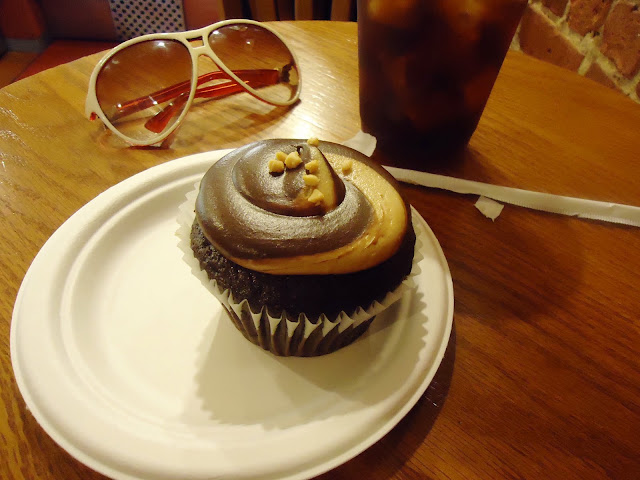 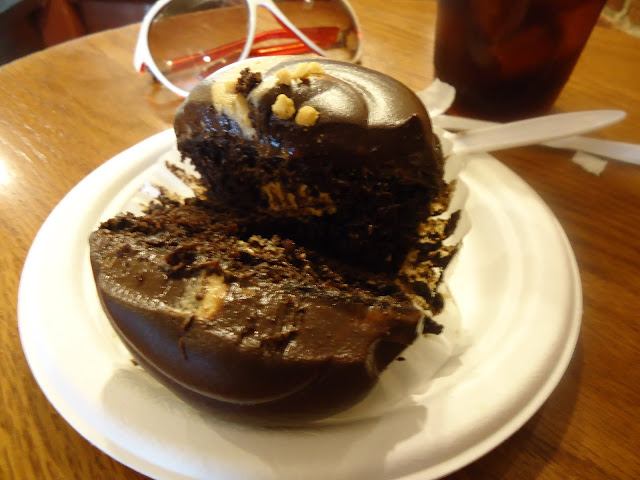 Stop by Two Little Red Hens afterwards for much needed sweet relief http://www.twolittleredhens.com/
Posted by mac at 9:57 AM