This Thanksgiving, Just Pass on These Turkeys 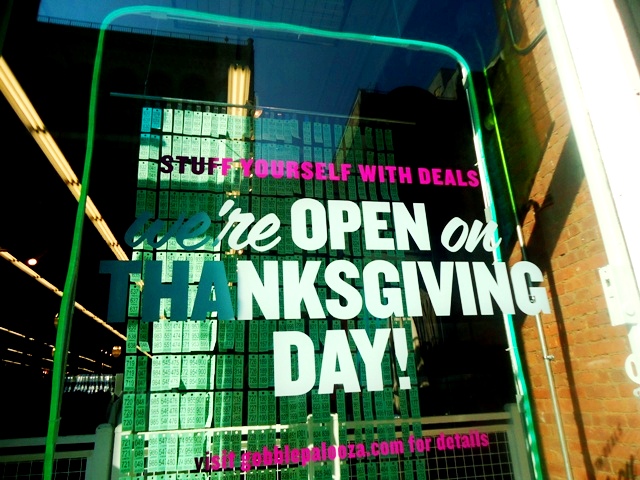 Worried solely with stuffing their bottom lines the following turkeys (or Thanksgiving grinches, really) are open on Thanksgiving Day:

Old Navy, the owner of the sign above, will be open a disparaging 9am to 8pm. God, I would riot if I worked here (and the Thanksgiving hours really suck too) Can't cardi coats wait?!

Back when I was a little guy living in Maryland I remember signs advertising K-Mart's Thanksgiving hours. I thought "this will never catch on!" Boy, was I wrong. This year forget your family and feasting, cuz there are blue light specials ALL day long: 6am to 9pm. Ick!

Ugly stepchild, Sears, does whatever its bossy wicked sibling tells it to, so following K-Mart's lead, Sears will be open Thanksgiving a brief 7am to Noon. Now while that seems merciful next to these other creeps, just remember your own T Day traditions: carouse late into the wee hours of Wednesday nite with friends you haven't seen since your last visit home, sleep in late T Day morning to wake up just in time to watch Santa ride by in the Macy's parade, which coincidentally ends at noon. Sears employees? Robbed.

You know this is a bad trend when Wal Mart ends up looking good. Sure enough, this beast is opening its doors midnite on Thanksgiving saying it's really the beginning of Black Friday. Somehow that almost makes sense. 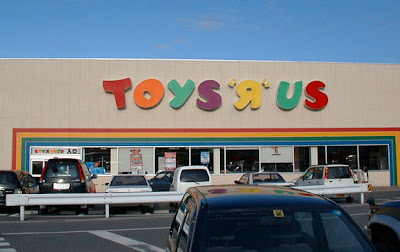 Toys r Us wants to beat Wal Mart to the chase and is opening at 10pm on Thanksgiving. People this isn't a race. There's plenty of looking like an a-hole for everyone! 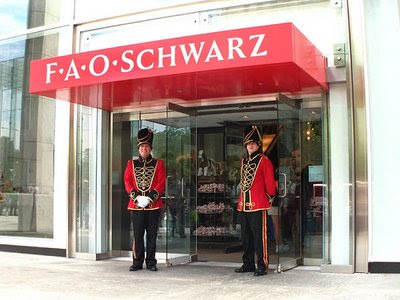 Mythic New York toy store, FAO Schwarz, will also be open Thanksgiving from 10am to 5pm. What's with all the toy stores being open? Do we really want to imprint on our kids that purchases take precedence over family and giving thanks?

Email ThisBlogThis!Share to TwitterShare to FacebookShare to Pinterest
Labels: DON'T